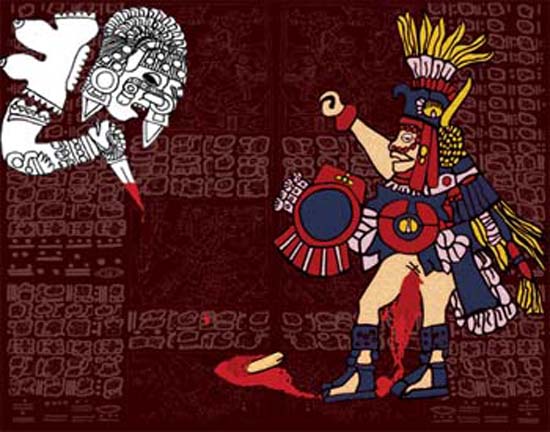 Castration and Memory
The enigmatic findings presented in this exhibition are the recovered research of 19th century German archaeologist Helmut Mythusmacher who studied Aztec Northern migrations until his disappearance in 1848. Lost for over 150 years, this evidence brings forth new insights that link Aztec historical memory to the castration of the Aztec warrior. The conclusions drawn from Mythusmacher’s survey of 1848, reveal a violent search for a homeland among foreigners and a desperate attempt to recover a forgotten past. In this exhibition, we revisit the passageways of Aztec memory and revise its amnesia by excavating history’s complex anomalies and underwriting their significance.

German archaeologist Helmut Mythusmacher traveled to Mexico in 1840. Influenced by the codex borges, he departed Mexico city in 1846 to retrace the migratory route of the Aztec emissaries with the intention of relocating the ancient Mexico homeland, aztlán. Mythusmacher wandered the north American desert for two years in search of signs of Aztec culture and In late 1847, he discovered several Aztec artifacts in a hoard along the Rio Grande marked by an Aztec cudgel. This discovery led to a major excavation of Aztlán on the salt lake river, Arizona in 1848. this ground breaking excavation was abandoned the same year when Mythusmacher was killed in a land dispute. It was not until last year that Mythusmacher’s artifacts, journals, photographs, and identity were rediscovered in the basement of a cattle ranch in Las Cruces, new Mexico.
Returning to Aztlán
At the height of the Aztec empire, Moteuczoma Ilhuicamina I dispatched a group of warriors and high priests to locate the forgotten homeland of aztlán. According to the Mythusmacher survey, moteuczoma’s emissaries rediscovered Aztlán After a long migration north in what is now southern Arizona. However, the entrance to Aztlán was inaccessible. the warriors were not granted rite of passage into Aztlán when they neglected to recognize the goddess of the moon, coyolxuahqui. after waiting several days, the warriors were taken by a dark vision of coyolxuahqui who informed them that in order to access memory of the neglected goddess, they were to be subjected to a mnemonic ritual of castration. this transformative ritual severed the warrior’s ties with amnesia and flooded his body, not with loss, but with ancient memory.

The castrated warriors returned to Tenochtitlan empowered with the memory of their own history and fostering new perspectives on the mythology of the empire. accessing memory loss through castration of the Aztec warrior became a cultural ritual for the Aztecs and is still metaphorically practiced in the southwest today.